A man’s house is his castle

In 1644, English jurist, Edward Coke, said, “A man’s house is his castle.” Domus sua cuique tutissimum refugium – One’s home is the safest refuge for all.

The expression even found its way into our Bill of Rights, “The right of people to be secure in their…houses…against unreasonable searches and seizures shall not be violated.”

Several years ago I was in the Dominican Republic working on a project and shot this photo of a man standing on the street in front of his house on the outskirts of San Juan near the village of El Cercado. As we passed by he stood stoic and still, not moving anything except his eyes. He watched us approach and he watched us pass. But he didn’t move. It was clear this was his territory, his property, his domain, his house, his castle. 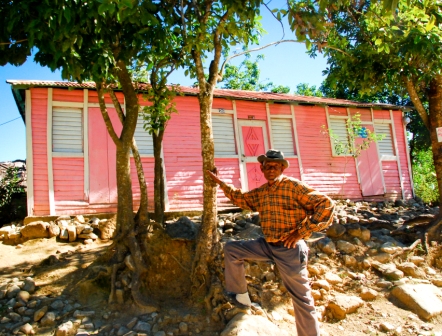 Within the heart of every boy is the desire to build and to rule. Guys frequently get accused of forgetting a lot of things during our lives. On occasion we’ve been known to forget our wedding anniversary, clothes sizes, and to take out the trash. On rare occasions we’ve even forgotten the name of our first-born.

But every guy reading this can tell you in pain-staking detail about his first car, his first girlfriend, and his first fort. Some resembled the shape of a simple square box (his fort or his car, not his girlfriend).

In the Bible, Jesus tells a story about fort building, about castle building. It’s the story of a man who builds his life on a shifting sandy foundation. Jesus says, “When a storm rolled in and the waves came up, it collapsed like a house of cards.” And Jesus called this man a fool.

Many of you reading this post are about to get engaged and then hopefully married. There’s going to be a lot of competition for your time and attention – plans and rings and dresses and tuxes and ceremonies and parties and vows and, yes, photographers. But remember, whatever else you do, build your home wisely on Christ’s firm foundation.

If Beaufort Photography Co. can help you in any way, please don’t hesitate to contact us. We would love to photograph your engagement and your wedding as you begin building your castle together.